Lord Alan Sugar has slammed youngsters for ‘sitting around on bean bags all day’ instead of working hard five days a week.

The Apprentice boss, 74, said young people no longer have a ‘hunger’ for hard work and said they spent their time ‘flicking elastic bands’ at each other.

He also hit out at IT companies, who he claimed have a ‘come and go as you fancy’ idea, rather than having a full five-day working week.

Lord Sugar, who famously started his career by selling car aerials out of the back of a van, told The Sun: ‘Young people these days tend to be IT literate and become programmers.

‘And companies like Google, Facebook or Twitter have this “come and go as you fancy” idea and they let them sit on bean bags and flick elastic bands at each other, and this “turn up when you want to” idea.’

He insisted that, in comparison, he always worked five days and then enjoyed the weekend off, saying work-life balance is a ‘touchy subject’ for him.

The businessman added: ‘The world has changed and everyone has got their iPhones now and Nike trainers, there is no hunger any more.’

Lord Sugar grew up on a housing estate in Hackney and is now worth more than £1.2billion, but said today’s youth don’t have the same drive and instead want a ‘cushy job’.

He said he wants to keep away from ‘cheeky’ young people who he claimed come to work at his company and complain about having to do ‘a day’s work’.

The business magnate also argued that degrees don’t show what people can do, saying it only becomes clear when they begin a profession they are ‘passionate’ about.

His comments come after it was announced that The Apprentice will return for its stellar 16th series in January.

The BBC’s award-winning business show will kick off in its new Thursday night slot from January 6, promising plenty of fireworks in the highly anticipated comeback. 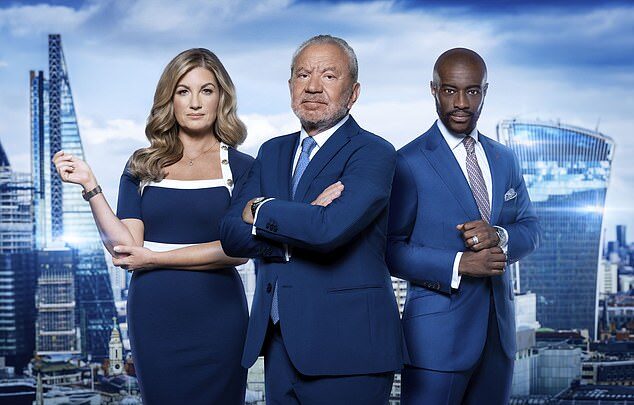 The mogul is joined by longtime ally and advisor Baroness Karren Brady and series one winner Tim Campbell, who is replacing an injured Claude Littner for the series.

Claude is recovering from multiple surgeries after a serious accident.

Filming for this series was planned to begin in Spring 2020 but the onset of the Covid-19 pandemic forced the BBC to postpone production to a later date.

In May, it was announced that filming would finally take place later in the year.

With 16 new candidates competing to win a life-changing £250,000 investment in their business, the series launches with a challenge that is anything but plain sailing.

Aboard a brand-new cruise ship laid on by Lord Sugar, the candidates are split into teams as they’re tasked with designing an advertising campaign for a destination cruise.

After being thrown in the deep end during the first task, those who do survive will face a host of equally daunting challenges ahead as relationships are tested and competitive drive is flared.

The tasks include being launched into the world of children’s oral care, an adventurous brief to boost Welsh tourism with zip lines and steam trains – and the development of an original video game concept will also take things up another level.

The budding entrepreneurs will also find themselves in the spotlight as they sell live on TV, negotiate fishy waters in Cornwall and navigate a racing inspired corporate away day at Silverstone.

There will be no easing gently back into boardroom life this series as Lord Sugar makes no secret that the stakes are higher than ever.

Each task will end with the candidates being summoned in to fight their corner in the boardroom, with one final opportunity to escape the firing line.

Speaking from the boardroom in the first episode, Lord Sugar said: ‘I must say, we are glad to be back in the boardroom again. But don’t for one minute think I’ve gone soft.

‘Due to the pandemic, the world of business is tougher than ever before and the same goes for this process. In this boardroom you don’t get furloughed, you get fired.’

Over the years, Lord Sugar has invested close to a staggering £3million into winning pitches and this year’s ambitious entrepreneurs will be doing their utmost to prove they mean business as they fight it out for the life-changing investment opportunity.

Comedian, writer and actor Tom Allen returns as host of The Apprentice: You’re Fired, which will air each week on BBC Two straight after the main show.

Casting a wry eye over each week’s events, Tom will be joined by a host of celebrity fans and business professionals to dissect and debate the candidates progress through each task.

Two special episodes, The Final Five and Why I Fired Them, will also return to reveal the stories behind the series before the finale.

The Final Five reflects on the journey of the candidates who make it through to the interviews, before they battle it out to secure their place in the final. Before the series finale, Lord Sugar will also reveal a further insight into his boardroom decisions in Why I Fired Them.

The Apprentice will air weekly on Thursdays at 9pm on BBC One from 6th January 2022, followed by You’re Fired on BBC Two.

Read more:
Lord Sugar claims youngsters don’t have a ‘hunger’ for hard work and prefer to sit on ‘bean bags and flick elastic bands at each other’