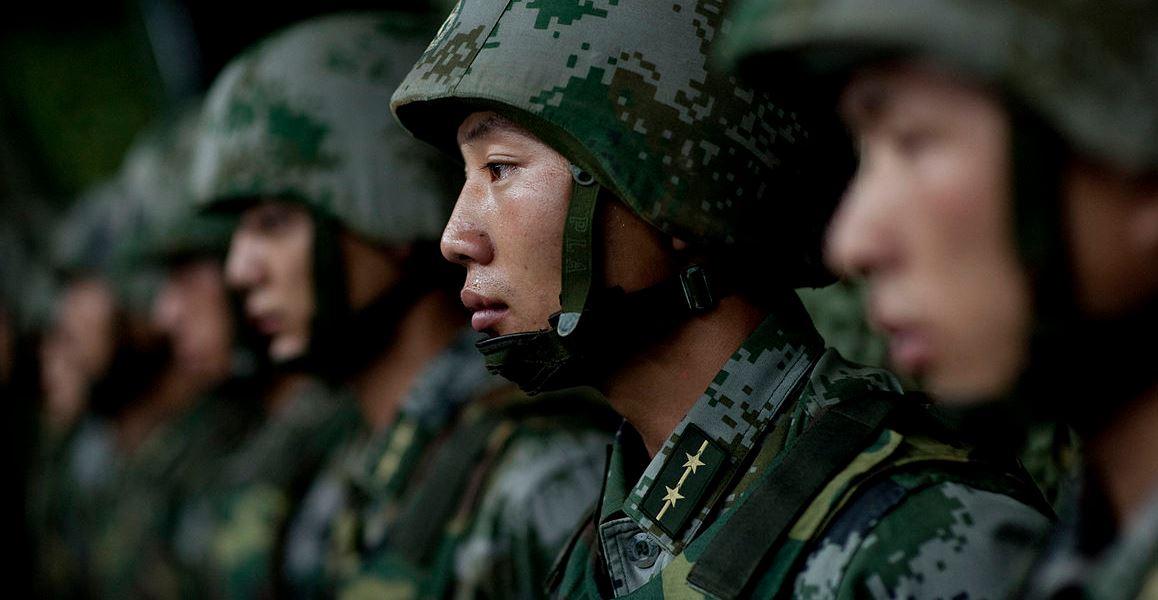 At this point, most everyone is now familiar with a certain narrative about China. Namely, the narrative about how China will soon be the most economically powerful country in the world, and how its military power will soon eclipse that of the United States.

But is China really poised to rival the United States as a major global power?

In his book, Unrivaled: Why America Will Remain the World’s Sole Superpower, Michael Beckley certainly doesn’t think China is in a position to do any such thing.

Beckley, a fellow in the International Security Program at Harvard’s Kennedy School, delves into the available economic, demographic, and military data on China to determine whether the Chinese regime can really hope to become a global power in the same league as the United States.

His answer? Such a scenario is extremely unlikely. Rather than heading in the direction of rivaling the United States, China is a rapidly aging, inefficient, conflict-ridden, and relatively poor country that simply is not on the road to seriously challenging the US’s hegemony.

But why are so many convinced that China is immensely powerful?

Much of this, Beckley shows, stems from misunderstandings over how to measure military power. It is often assumed, for example, that gross domestic product (GDP) is the key factor in determining overall geopolitical power. China of course, has a huge GDP that’s comparable to that of the United States. But as Beckley observes, a large GDP isn’t necessarily a big advantage when a country has over a billion residents. In practice, a large GDP doesn’t mean a regime has immense amounts of resources available for war making. Rather, a huge portion of GDP in a highly populous country must go toward providing food, housing, and basic necessities to its enormous population. What is at least as important, Beckley points out, is per capita GDP which is a better indicator of net resources.

We can see this in comparing the US and China today. The US and China have similar overall GDP measures, depending on which statistic one uses. But the US achieves its huge GDP with a population that’s one-third the size of China’s. This means only a small portion of America’s GDP is used for basic needs such as food and housing. In other words, the US has a China-sized economy, but that huge economy is produced by a much smaller number of people who live much farther above subsistence than the average Chinese. This means the US could, if necessary, devote much more of its wealth and resources to war making before the general population had to endure significant declines in the standard of living. A country that lives closer to subsistence levels—as China does—has no such luxury.

In many ways, it’s better to be wealthy than large. For example, Britain’s economy was much smaller than China’s during the nineteenth century, yet Britain repeatedly defeated China in the Opium Wars. Similarly, Japan repeatedly humiliated China from the late nineteenth century into the middle of the twentieth century. This was possible because both Japan and Britain were far more efficient, productive, and wealthy on a per capita basis. The overall size of China’s economy during these periods was not a decisive factor.

The United States, of course, is both wealthy and large.

But maybe China is quickly heading in the direction of economic dominance and will soon be nearly as wealthy as the US?

“Not so,” says, Beckley who points to numerous trends in economic growth and demographics in the US and China.

Even assuming China’s official numbers are accurate—a questionable assumption, Beckley notes—China’s growth is slowing, and debt is increasing. Debt has risen “from 100 percent of GDP in the 1990s to more than 255 percent in 2017.” This makes China now comparable to the US in debt load, but China’s debt is growing much faster than the US, and China’s debt growth is the largest ever recorded by a developing country.

Moreover, much of China’s GDP is an artifact of huge government-funded infrastructure programs, which are immensely wasteful: “China’s mega-infrastructure projects look impressive, but roughly 60 percent of them cost more to build than they will ever generate in economic returns.”

But even where growth exists, it’s unlikely to be sufficient to overcome the US economic dominance. After all, the United States is already wealthy and brimming with productive capital. China, on the other hand, is a developing country, and even if it enjoys higher growth rates than the US right now, these growth rates must persist for many years before China’s capital stock will begin to resemble that of the US. Nor is there any iron law that developing countries grow faster than wealthy countries. Over the past two hundred years, wealthy countries have generally grown faster than poorer countries.

So, while China may be growing, it is still far behind in terms of the productive capital that the Chinese can access right now. As just one example of China’s lack of productive capital, we could note “China devotes 30 percent of its workforce to farming.” In the US, one percent of the workforce is necessary for food production, partly thanks to extremely productive capital. But in China, 40 percent of farmers still use animal power or human muscle to plow their fields.

China has a long way to go.

Growth and economic development is also crippled by the fact China’s economy is not a free economy. State-owned enterprises continue to dominate the economy, and Beckley writes

Crony capitalism-whether measured by corruption indexes, social network analyses, or investigative reports, is several times greater in China than in the United States…. The major state-owned enterprises receive 75 percent of the country’s bank loans and 95 percent of government stimulus spending.

Additionally, resource development—an important factor for China’s economic development—is crippled by government ownership of mineral rights. This is in stark contrast to the far more entrepreneurial and innovative American system of privately owned real estate and oil and gas resources. Government expropriation of private property is far more widespread in China, and Chinese entrepreneurship is not comparable to what goes on in the US.

The United States, for all its moves toward further constraining and controlling markets at home in recent decades, nonetheless remains far more advanced than China in terms of protecting property rights and thus fostering economic progress. That’s a big reason why the US is more prosperous.

China faces a host of demographic problems as well. “China is aging more rapidly than any society in history,” Beckley notes. China is quickly becoming a country of the elderly and the disabled. China is also less healthy: “China’s rates of diabetes and prediabetes also recently surpassed America’s, mainly because of poor nutrition.”

Other health problems persist because water and air is so heavily polluted in China, and “90 percent of China’s groundwater is polluted to some degree…. Air pollution is seven times worse in China than in the United States…. Breathing Beijing’s air is the equivalent of smoking forty cigarettes a day.”

The United States is much younger, more fertile, and more healthy than China’s population. Its workers are better trained. Perhaps it should not be surprising then that “American workers are the most productive in the world and generate roughly seven times the output of Chinese workers on average.”

But perhaps in spite of all of this China is still more militarily powerful than the United States?

Extremely few key indicators point to such a reality. According to Beckley, “The United States has five to ten times the net military assets of China.” American troops are better equipped, and better armed than Chinese troops. Beckley describes how American nuclear subs far outclass Chinese subs. The number of advanced aircraft and naval vessels available to the US—and which can be easily and frequently refueled and resupplied—is much larger.

Meanwhile, China is partly hemmed in by wealthy and well-armed neighbors such as Taiwan and Japan. China’s attempts at annexing the South China Sea has earned the ire of the Philippines, Vietnam, and Malaysia. Moreover, most of China’s neighbors have the ability to inflict real damage on China’s troops and other military resources.

Compared to the US, China must expend far more of its military in dealing with neighbors: “China must secure its land borders, which stretch fourteen thousand miles and include boundaries with fifteen countries…. China shares a bitterly contested fourteen-hundred-mile border with India.” The border with Vietnam “remains tense.” In 2014 and 2015, Chinese and Vietnamese forces exchanged fire. China borders North Korea, which is not exactly a source of serenity for the Chinese state.

China is in no position to project power outside its own region at all, and thus Beckley concludes, China “cannot maintain sea or air control in its near seas; doing so in the Pacific Ocean or near the American cost is out of the question.”

What Is to Be Done?

As an antialarmist on China, it is perhaps not surprising that Beckley provides a number of sensible recommendations for restrained foreign policy. He suggests the US move toward allowing a large role of the Chinese in a reunified Korea, with the potential for withdrawing US troops completely. Beckley recommends a more defensive posture for the US, rather than one that repeatedly attempts to project American power into areas of critical interest for China or for other major powers like Russia. The purpose would be to “raise the costs of military aggression for China and Russia, but without backing them into a corner.”

For Beckley, restraint is prudent, and “the main danger would be in doing too much rather than doing too little.” And perhaps key in adopting this posture is getting over the idea that the US is in the midst of another Cold War. “The United States is exceptionally secure,” Beckley asserts, and it can thus take a “wait and see” position in responding to moves by China. There is no need to act as if it were the 1960s, when the Cold Warriors of old demanded a swift and large response to every act of the Soviets during the Cold War.

Unrivaled is certainly not without its faults. Written during the Trump administration, much the final chapter already feels dated with Beckley musing on the effects of Trump’s protectionism and unilateral actions in the international sphere. And when it comes to domestic politics, Beckley’s recommendations reads like a center-left wish list of policies, including higher rates of social spending and efforts to increase voter participation. Moreover, the general ideological context of the book is dubious in that it is assumed US global hegemony and dominance is an obvious boon to humanity.

As a resource for countering anti-China militarism, however, Unrivaled is an invaluable resource replete with a myriad of useful statistics, facts, and explanations of demographic, economic, and military trends. Beckley even addresses the military realities of specific cases like a possible future invasion of Taiwan, or China’s attempt at taking over the South China Sea. But in every case, the Chinese regime’s dreams of regional or global hegemony continue to break up upon the rocks of China’s sizable economic and demographic problems. These are problems that must be acknowledged by any politician or pundit seeking to use China as an excuse for continued aggressive American foreign policy.